Last week, 7 churches collaborated to create an evening of prayer, learning, music and discussion to bring attention to the Syrian refugee crisis.  I worked on a learning station designed to give youth a sense of the large number of people who have been displaced. Each person began with symbols representing 22 million people who lived in Syria in 2011.  More than half of those have fled their homes in the last 5 years.

Participants journeyed along a painters tape path, placing the people symbols on different country maps to learn where Syrians have fled to. Along the path were images of current events and opportunities for prayer and reflection.

At the end of the evening, the large outline of Syria looked quite chaotic; this was a striking visual reminder of the massive number of people who have been displaced since 2011

I have uploaded the file of instructions for our Syrian displacement activity if you would like to adapt it for your own use. Using reputable sources, I did the best I could to accurately represent the numbers, which are shifting daily. The point of this exercise was to visualize the enormous impacts on Syria’s people. Feel free to change the numbers if you feel they need adjustment.

Links to organizations that were at our event:

Bassel and the Supernaturals

Our world is facing the largest refugee crisis since WWII, the largest number are from Syria.  Civilians who remain in Syria. are at risk of starvation as entire towns are under siege.  I urge you to be in prayer for all those around the world who are desperately seeking safety and peace. 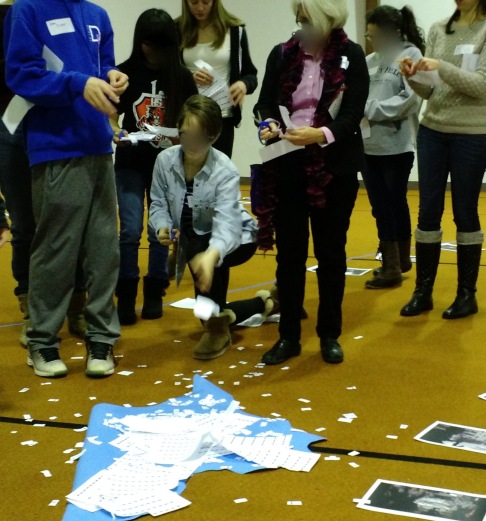 Praying for the children

Journeying along the path

The outline of Syria at the end of the evening.

This site uses Akismet to reduce spam. Learn how your comment data is processed.

Get the Latest Updates:

I also write for:

Popular on Bless Each One